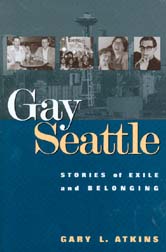 Here is some of what others have said about Gay Seattle:

“This is one of the best works of regional history to be issued in the past five years or so.”
– Dan Hays, Salem Statesman Journal

“A groundbreaking new book…[This] story as been told in fragmented fashion in newspapers and on television, but it’s never been put together in such dramatic fashion before…[Atkins] has a gift for transforming each story into a page turner…Gay Seattle tells the story of 20th-century Seattle in more compelling detail than any other book.”
– John Hartl, Special to The Seattle Times

“A detailed study of the evolution of lesbians and gays in Seattle that contributes significantly to the larger historical studies of gender and geography…In his lively narrative based on extensive oral histories and public records, Atkins skillfully weaves national changes and developments into stories of local individuals and movements, making this a study of importance far beyond the borders of the Pacific Northwest…A fast-paced, informative, and entertaining read.” – History: Reviews of New Books

‘Atkins’ sharp style is a fluid combination of observant, level-headed reportage and you-are-there storytelling. It’s the kind of rich, accessible writing that will have you opening the book on any page, intending a quick skim, and finding yourself still reading an hour later…Atkins has accomplished something fine here: an important social document that feels less like dry history and more like life.”
– Steve Wiecking, Seattle Weekly

“Gary Atkins has given us a richly textured and wonderfully readable account of the development of gay and lesbian life in one American city…Gay Seattle is a major contribution to gay and lesbian history. It adds significantly to our understanding of the emergence of gay urban communities in the second half of the twenthieth century. And its rich tapestry of personal stories makes it a pleasure to read.” – Committee on Gay and Lesbian History Newsletter

Stories of Exile and Belonging